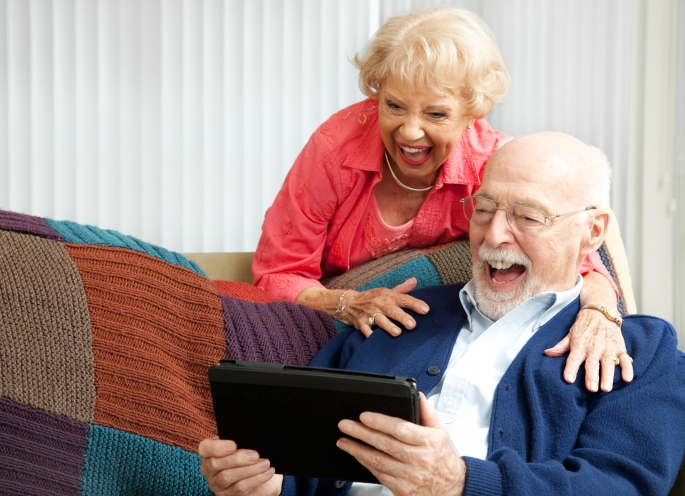 Black Friday  is at the end of this week after Thanksgiving.  What to get for grandma and grandpa?    The lists of things to buy are usually lotions, and socks, and slippers, and grocery gift cards – all which are good!   But I was thinking…. what do elders really want?

My grandchildren say I am ‘really cool’ because I stay connected with them on Facebook, Instagram, texting, phone, and Snapchat.   I don’t know about cool, but I am grateful that in my elder years I can continue to be part of the greater community and my family even when the day comes that I cannot travel as I can now. So I asked the elders I come in contact with around the United States What do you want?   And their answers were the same as mine!

The greatest gift you can give is a way for your loved one to stay connected.   You might be surprised how savvy elders can be with a quick tutorial on tablets and iPads and smart phones.

There are some things that are important to consider, if you are thinking about technology gifts.

2.  SMART PHONE: Phones are not only important for keeping the social connection, and necessary for quality of life — but also give elders peace of mind. Many smartphones  offer large buttons, speed dial, visual rings and more.

3. DIGITAL PHOTOS:  With most of our photos on social media these days, we don’t often take the time to print photos.

4.  IPOD OR MP3 PLAYER & HEADPHONES: Studies have proven that music has a powerful therapeutic benefit for all people, and particularly elders.

If you haven’t seen the documentary ‘Alive Inside’, it is available on Netflix, and we have seen the power of music to alleviate depression, improve memory, and enhance life!

5.  AMAZON ECHO DOT: Cost  $50.   This is my newest best friend, and I have one in my home office.    In the morning I can say, “Alexa good morning, what is the weather like today?”  She gives a weather forecast.  I can ask what the time is.  I can ask Alexa to play my favorite music.  I can even order through my Amazon Prime account.  “Alexa, add sugar to my cart”.    I can also say, “Alexa, tell me a joke” (they are not very funny!), or “Alexa, what’s in the headlines today?  or  “Alexa set a timer for 10 minutes”.   This week, as I was experimenting with this, I thought this might  be nice for an elder to have in his or her home, especially if visually impaired.  If you have a ‘smart home’, you can also say, “Alexa, turn on the lights in the living room”, or  “Alexa, lock the front door.”

I found a funny video of elders learning to talk with Alexa.

I had to add this  to my “Cool list” today

Technology is here to stay, and the elders I talk with are excited about the possibilities of leading a more vibrant connected life in this new era.  Yes, some say, “I am too old for this.”   But as soon as a connection is made, it is amazing to see how purpose, connection, spontaneity, and joy is evident in their lives!

Another documentary available on Netflix I have been following is ‘Cyber Seniors”  watch the trailer here.   Happy Holiday Shopping! 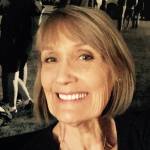 About the Author:    Jean Garboden is the Director of Education and Innovation at Compass Senior Living, located in Eugene Oregon. Jean is an Elder Advocate and Eden Alternative Educator with over 30 years’ experience in not-for-profit and for profit health care organizations. She is honored to lead the mission and values culture development for Compass Senior Living.  Jean lives in Las Vegas, Nevada where she enjoys the weather and volunteers with the Nevadans for the Common Good, advocating for caregivers and elders in southern Nevada.

On Tuesday, July 26th, I was visiting my 15 year old grandson, Gabe, in Eugene, Oregon. Gabe and I have always had a great connection. Over the years we connected through Lego building, collecting Pokemon cards, and more recently with Snapchat.  The last time we were together, he and I talked about how much we miss the old days when we played together, as he is now so busy with school and track practice.

When I saw in my newsfeed about the new Pokemon app on Sunday, the 24th, I texted Gabe and asked him if he had downloaded it.   Yes, he had!  When I arrived in Eugene, we decided to go to the University of Oregon campus and have dinner, and try out the new app.  The Olympic trials were going on, so a lot of people were on campus, and it was hilarious to see  people walking around with their phones, hunting Pokemon. Gabe and I walked and laughed and talked and captured Pokemon for 3 hours! It was an awesome connection for us both.

I was born in the 40’s and grew up in the 50’s and 60’s. It is a different world now, and I am grateful for the power of social media to keep me connected to my grandchildren who do not live near me.

The elders who live at home or in Assisted Living communities can benefit from the connections social media can facilitate for them. I have seen it happening in the communities I visit.  We encourage our care team members to help the elders connect with their families, and the outside world.  In the process the care team members make a special connection with the elders and develop deeper relationships.

In one community in Roswell New Mexico, Ms. Virginia  was not able to travel to S 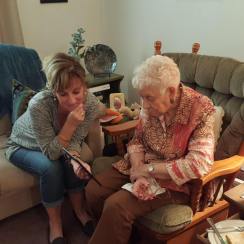 an Antonio to attend the wedding of her granddaughter due to fragile health.  The Executive Director, Mary Beth,  contacted the family and asked if they could stream the wedding through a smart phone or an iPad so that their grandmother could be there.   Ms. Virginia had a front row seat as she watched the wedding on an iPad from her apartment in Roswell, and even got to speak with her family face to face.  Both Mary Beth and Virginia shed tears of joy and gratitude.

In another community, the Life Enrichment Director was introducing social media during a resident council meeting, and  Skyped me in from my home in Las Vegas to talk with them.  At first the residents thought they were watching a movie until I started greeting them by name!

Face time is being used  in one of the Memory Care Communities I visit.  The daughter lives in another state, and every night she calls her father on his iPhone and they talk about his day, and she wishes him sweet dreams, and he tells her he loves her.

I talked to one 87 year old elder who was introduced to Facebook while I was visiting.  The care team called her family to let them know she was on Facebook, and they were able to video chat that evening.  The next morning when I went back into the community the elder told me, “I got 8 likes last night!”   Her family had notified some old friends, and she was connected with people she had not heard from in 40 years.

I saw one 92 year old man with headphones and an iPad.  I asked him what he was watching.  He said, “I am watching youtube videos about gardening.  This has opened a whole new world for me.”   Another woman who grew up in New York was able to do google earth, and virtually walk down the street where she grew up.

It is a basic human need to be connected to one another. It is also crucial to our well-being that we all continue to learn and grow through childhood, through adulthood, and into elderhood.  Let’s create places where the elders are the center of the community, where  we facilitate connections, and grow and learn together.

Watch this short trailer Cyber Seniors  from a documentary created by teenage sisters with a mission to remain connected to their own grandparents, and in the process changed the lives of many.

About the Author:    Jean Garboden is the Director of Education and Innovation

at Compass Senior Living, located in Eugene Oregon. Jean is an Elder Advocate and Eden Alternative Educator with over 30 years’ experience in not-for-profit and for profit health care organizations. She is honored to lead the mission and values culture development for Compass Senior Living.  Jean lives in Las Vegas, Nevada where she enjoys the weather and volunteers with the Nevadans for the Common Good, advocating for caregivers and elders in southern Nevada.  She spends her leisure time with her husband Art, her dog Max, her cat Molly, and a 50-year-old desert tortoise named Myrtle.